…back up the truck.

Just a heads up that for the next few days, you might not be able to find le blog here. We’re working on a brand new, super-snazzy site that’ll include all your favorite content with a shiny new wrapper. However, stuff around here might vanish intermittently.

Keep your eyes peeled for the new and improved EmmieLand!

We all like a fun workout, right? Well, I thought about going to the gym yesterday, but then I realized I had about two full seasons of Supernatural to catch up on before the season eight finale. And erm…priorities.

So I decided to try to get the best of both worlds, and I created the Supernatural marathon workout game!

Beware, there might be some spoilers nestled in here.

Here’s the sitch. It works pretty much like a drinking game, but you know, without the booze and with a lot more exercising. There are plenty of fun things I love about Supernatural. The Impala. The meta. The Sam.

There are also a lot of things that reappear fairly often. Like…the Impala. And motel rooms. Angels. Demons. And erm, death. So I made up a little program of exercises to do! Amanda Byrne suggested that I share it with you, so for your Friday funsies, enjoy!

Let’s start with the basics. To do this, you’ll need access to some or all of the seasons of Supernatural, a love of Winchesters, and a bit of open space. You’ll also need some dumbbells of whatever weight you fancy moving around. Some exercises you can do with your bod alone, others you’ll want to use weights.

Here’s what I came up with!

1. If you see the Impala, show that muscle car some muscles.

What better way to do this than bicep curls? Grab a dumbbell in each hand. Keep your elbows close to your torso. Contract your biceps, raise your weights. Don’t grunt unless you want the lunk alarm to go off. I did 30-50 reps with smaller weights for this. Do what you gotta do.

2. Motels are popular places. Sort of. Whenever Sam and Dean hang out in one……

Nope, you’re not trying to plank on top of the McDonald’s arches. We’re talking the other kind of planking. I like to do this one leaning on my forearms. Keep your body (especially your core) as straight as possible. Raise yourself up on your toes and forearms and hold the position for whatever time length you fancy. I go with 30 second increments.

Image property of the CW.

3. We’re gonna mix the Impala with some Queen, because when they’re driving, you want to ride your bicycle.

Not the traditional bicycle. We’re talking bicycle crunches. Whenever the boys are driving around, you get down on the ground, lie on your back, and alternate extending each leg in front of you. While doing this, put your hands behind your head and twist your torso from side to side, trying to bring each elbow close to the opposite knee. I did this in sets of 20 (per leg).

Excuse me while I MROW.

4. Only way to get abs like this is to work them out. A lot. Consider this your reminder.

Whenever you see a set of Winchester abdominals, get your crunch on. Pretty simple. You can do crunches, right? 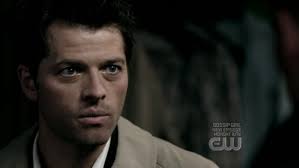 5. Flying is hard. Angels fly. Whenever you see one, flap your wings.

For this, you can use whatever weight of dumbbell you want, but you’re doing dumbbell flyes each time you see an angel. I don’t care if it’s Castiel or Lucifer. Get flapping.

6. When one of the Winchesters drops, so do you…and give us fifty.

Pushups, that is. These boys have a tendency to get dead. When they do, get your pushup on. Lots of pushups. It doesn’t happen that often, but when it does, you show those boys some respect by conditioning your core, back, and arms. Fifty pushups. Do them in as many sets as you need.

7. The Winchesters drink a lot. And somehow they manage not to get the beer belly. The only way they keep those cut obliques is by working them out.

You can do side crunches or side planks, or whatever you want. I like to use one dumbbell, hold it above my head, and lean from side to side. You’ll feel it in your sides. Just picture the V. Or, you know, Dean’s or Sam’s.

8. When they fake an occupation, so do you.

Those Winchesters like to flash badges that aren’t theirs. For this one, you hold dumbbells in each hand with your elbows bent at 90 degree angles and held close to your torso like you’re going to do curls (or like a server holding a tray full of drinks). Stand on one leg with the other bent like a flamingo. At the same time, rotate both arms and the bent leg outward so that they’re all in line with your body, then back in so they’re in front of you again. It’s a lateral movement, no vertical curling, etc. Do about ten reps on each side.

Eight different exercise triggers in honor of the eight seasons of the show.

Have fun getting as ripped as the Winchesters! Got ideas for more we can add? Let me know in the comments!

Searching for SuperWomen is LIVE!

I am so excited today to announce that Searching for SuperWomen is live! The inaugural post is up — my story of why I decided to start this project. You can look forward to hearing from the other wonderful women on Wednesdays this month. Next up is Fran Roberts!

We’ll be back to normal scheduling around here Friday, but today, please pay the new site a visit and let us know what you’d like to see from us in the comments!

Thank you all for your awesome support Monday with the announcement — click the glowing blue orb to be transported to Searching for SuperWomen. 😉

Click the blue orb to visit the site! The Orb (Photo credit: Jason A. Samfield)

Posted in Searching For SuperWomen